Felix Griffin of D.R.I. and other Texas Punk Memories 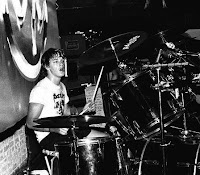 I was supposed to be reviewing a stack of Texas punk rock and bluesy or cornpunk music cds sent to me tonight - The Rock Garage Texas Live Concert Series, Hickoids, Churchwood and T. Tex Edwards and the Swingin Kornflake Killers but I got sidetracked reminiscing about Texas. I had driven through there once on tour in the late 80s with my old roommates M.D.C. It was so flat there, driving forever without seeing anything or anyone. The punk clubs were high ceilinged, huge and sweaty. There was graffitti scrawled on the ladies restroom wall in Houston about Verbal Abuse singer Nikki Sikki, just like there was in S.F. We were all squished in an R.V. together, a band, a girl (me) and a big fella named Monterey Mark. Mark was a skinhead but he was touring with a punk band. Dave said the promoters paid up more quickly with Mark along on the tour. His stout, cross armed presence onstage also seemed to mellow the aggression of antagonistic skins M.D.C. encountered at many concerts.

After we got back from tour to S.F. I returned to singer Dave Dictor's pad where I lived in a punk commune of sorts although it wasn't officially called anything other than the Rathouse. Others who lived there were Joe Britz - zine publisher of Tales From the Rathouse and Lawrence Livermore who started Lookout Records and discovered Operation Ivy and Green Day. I wrote for Lookout zine once in a while. My first review was of Redd Kross' record Neurotica. Dave introduced me to his old friends from Texas like Mikey Offender Donaldson, the bass player from the Offenders and M.D.C. and then songwriter/bass player for Sister Double Happiness and his girlfriend at the time Tammy (who had also been Dave's and M.D.C. guitarist Ron's girlfriend at one point, although I can't remember who was first.) Tammy was THE muse for M.D.C. and so many bands from that time and place. She was a beautiful blonde heartbreaker with a big round derriere, a tattoo of a feminist fist on her right arm and, rumour had it, webbed toes, which only seemed to add to her mysterious allure to men. "Webbed toes?" I asked, "there's a part of Texas where that sort of thing is common," a Texan ex-paramour informed me. This was my first inkling that Texas and its inhabitants were "different."

Dave also introduced me to Gary Floyd, singer from the Dicks and he told me what an inspiration Gary was, that he had come out of nowhere and shocked everyone at the University of Texas campus crossdressed and curvy with a mohawk, being flagrantly homosexual in the late 70s/early 80s conservative Texas climate. Dave had moved from New York to study at the University of Texas. He wanted to be a lawyer before he got into punk rock. They were heady times but I had a falling out with Dave over something and decided moving out was best and next became roommates with Ron Posner, the guitarist from M.D.C. Soon after me moved in the craziest and funnest roommate ever, a guy named Felix Griffin. Felix was the drummer in D.R.I. He did not come from a poor family but he did come from Texas, run away to live on the streets of San Francisco with the punks and skins before becoming a bonafide crossover punk metal superstar.

Felix fascinated me for many reasons. His crazy drinking yet talent that kept him on tour drumming with a successful world famous band. He was a musclebound handsome guy with huge blue eyes, sandy blonde hair and a boyish charm about his face. Yet, for all his macho prowess and strength he was so sensitive, reduced to a rubble of tears if he played the right Johnny Cash or Merle Haggard song. I was from New Jersey and had never heard Johnny Cash before. I was an ignorant fool who thought Johnny Cash was a funny, old guy and I couldn't understand why Felix didn't just listen to thrashcore music all day long considering that was what he played. His exgirlfriend had become a junkie, so out of touch with him or anyone she could feel for, that it hurt me to see Felix hurt. The dramatic highs and lows of his mood swings and relationships with his girlfriends was difficult to witness. There was a lethal pattern I noticed that began with a six pack, tears and country music and ended with a disaster. There was the night he crashed his truck through someone's garage door and spraypainted something mean on it afterwards.

Felix couldn't spell for s**t and didn't seem to read much but he was a musical genius and a really good drummer by music snob standards, going nuts with his amazing rhythms on a double bass set. He loved music and didn't just play his records through speakers, he blasted tunes through a motherf

**king p.a. in our apartment in the quickly gentrifying Haight Ashbury district. I will never forget the hysterical yuppie from upstairs shaking at the door with a policeman next to her as she hissed in a furious whisper that we turn the music down. "It's not me," I tried to explain, "it's my roommate." You could tell the yuppie lady was not used to being ignored. She seemed like someone who had always gotten her own way. "I have to work in the morning!" she snarled. Felix Griffin did not care. When he decided to drink and crank up the tunes, nothing could stop him. The cop said,"Well someone's going to jail and it's gonna be YOU if your roommate doesn't turn down the music." So I went back into the apartment and screamed at Felix at the top of my lungs, "The fucking cops are here and if you don't turn it down someone's going to jail and it's not gonna be me!" He would barely turn to acknowledge my screaming since he was usually in the middle of telling a joke to a friend and then finally he would turn it down and then the cops would leave and then the whole scenario repeated itself a couple more times in the evening, cops and all!

Felix could also be incredibly funny and made the most insightful observations about people, he described Ron M.D.C. as someone who couldn't turn a corner without walking in a right angle. When not playing/touring with M.D.C. Ron ran a shop called Fogtown Skates. He didn't skateboard himself but sold a lot of boards and shirts there. Ron's room was clean as a whistle and he liked nothing better than to kick back playing classical music on an acoustic while puffing a fatty. Ron could sight read music very well and loved musicians like Andreas Segovia.  In some ways, Ron and Felix were best friends and in many ways, their friendship had a Mutt and Jeff like quality of opposites to it. Ron was a brilliant Jewish intellectual who never cracked a beer and Felix was a bible belt good ol' boy who never cracked a book but they shared a sense of humor. There was always a laugh to be had but Ron wasn't laughing the time Felix and his old skinhead friend Sonny cooked a pound of bacon in vegetarian Ron's pan and Ron said it couldn't be scrubbed clean enough and threw the pan away.  But you know how sometimes it's human nature to make assumptions about the pieces fit together and the more you get to know people the smaller you find out the world is.

When I caught up with Felix over the phone recently, I realized the connection between Ron and him was not only that they were roommates but that they were band brothers through the revolving doors of band line ups. I asked him about his D.R.I. days and he told me, "the two best records are D.R.I. Dirty Rotten LP, Dennis played bass on it, the first one is classic no doubt about it and Dealing With It. Mikey Offender played bass on that. That era was super punk and straight up, we tweeked it. It was my idea to get Mikey to play bass." I had never realized that Mikey "Offender" Donaldson was a thread running through the sounds of so many of these great early Texas punk bands. I remembered Mikey sitting down and showing me the chords to John Wayne Was a Nazi and telling me how he had composed the intro to classic punk hard hit. Felix added that he had toured with M.D.C. as a drummer in 2008 in Europe for the Mikey Donaldson memorial. Felix also expressed sadness over the recent suicide of Chumley, who had been playing bass for D.R.I. Felix told me he plans to bring his daughter up to a November 26 concert in Oakland to see Attitude Adjustment and other bands play in homage to their departed friend.

Talking about the old days, Felix explained that much of his frustration was fueled by his feeling financially burned by Rotten Records who managed D.R.I.,"they ripped us off!" he told me about his old manager.  "D.R.I. getting ripped off like that, it fucked me up.  He stole the whole record company and embezzled tons of money.  He was having the cds printed up in Singapore or someplace like that so they couldn't keep an eye on how many were being sold.  After Crossover I called it Corrupshover, hell, we didn't even know what royalties and publishing were.  All of the street punks that crossed over to that scene got ripped off."

Like many drummers, Felix also feels like he didn't get the compositional credit and royalties he was due. He was the force behind changing D.R.I.'s sound to the crossover punk/metal legends they became.  "I helped compose Nursing Home Blue and I wrote the intro to Yes Ma'am on Dealing With It which is the record that changed everything.  I was turned on to Venom, early Metallica and early Slayer and I brought that to the band."

Since Felix quit playing with D.R.I. he has played in a Texas band called Roger's Porn Collection which released one album.  For the past three-four years he has played drums in an old school punk/Northeast hardcore influenced band called Blunt Force Trauma.  The band's themes , he explained, deal with new world order, Big Brother and antigovernment.  Last year they toured Europe with Napalm Death and Sick of it All.  He added about one band member,"Craig Holloway is a bass player from the Detroit area.  He's a great artist."  Blunt Force Trauma has two records out Good Morning America and Hatred for the State.  They are working on a new album called Let Them Eat Red, which Felix added, has the same elements as Dealing With It.

Back in the day, Felix would always reminisce about Texas, the state that spawned him, saying,"Where I come from it's so boring, all there is to do is get drunk and beat up your best friend. " So when people talk about England, poverty, misery and anger spawning punk rock I think of the desolation of Texas, a flatland peppered with bible belters, gun nuts and madness inducing pockets of isolation spawning its own special brand of punk rock (all those bands came from there M.D.C., D.R.I., Dicks!) and Felix Griffin.

As far as Felix's wild lifestyle goes he had racked up 10 years clean and sober a while back but had slipped for a while.  He hasn't had a drink in a month but added he is taking his life one day at a time.  You can't change somebody.  About D.R.I. he added,"I would still play for them."